Intrinsic safety implies that there is insufficient electric energy in a circuit to ignite the most readily flammable mixture of a gas and air. As mentioned in relation to classification, the energy can appear as a spark resulting from its sudden release or in thermal form from the temperature rise of a surface. The equipment design must consider fault conditions as well as normal operation.

According to the National Electrical Code, “Intrinsically safe equipment and wiring shall not be capable of releasing sufficient electrical or thermal energy under normal or abnormal conditions to cause ignition of a specific flammable or combustible atmosphere mixture in its most easily ignitable concentration.”

There is a fundamental difference between intrinsic safety and the other equipment application techniques. None of the others aims at preventing release of energy at a dangerous level. Instead they avoid the possible effects in a number of ways:

Intrinsic safety, on the other hand, deals with the root cause and ensures that there is insufficient energy available, whatever happens, to cause an explosion. It is, therefore, considered by some to be the safest and most technically elegant approach.

It has a number of practical advantages, offering compact design; reliability; low cost; simple installation; and the possibility, not avail able with flameproof equipment, of on-line maintenance, if required. The principal disadvantage is the relatively low amount of power available, although this has been largely overcome by a growing range of specially designed components and equipment. For all practical purposes, intrinsic safety is the only safe technique suitable for zone 0 and is often the preferred approach for zone 1 (division 1).

There are two standards on intrinsic safety in IEC countries, “ia” being the higher standard where safety is maintained with up to two faults and “ib” where safety is maintained with up to one fault. Equipment certified to ib standards is generally acceptable in all zones except zone 0, and ia equipment is suitable for use in all zones. In America there is only one standard, and all hazardous area equipment must maintain safety with up to two component faults.

Pneumatic actuators for process valve automation are well suited for low-power or intrinsically safe system integration. Where electric motors or other high-power devices do not directly interface with today’s computer-controlled systems, pneumatic actuators when properly sized and fitted with compatible control accessories can satisfy a variety of computer-direct process control requirements. When used in an intrinsically safe system, pneumatic actuator control accessories must be connected to a properly selected and approved barrier.

What are intrinsic safety barriers?

Intrinsic safety barriers are current- and voltage-limiting assemblies which are designed and constructed to requirements as described by ANSI/UL 913 (formerly NFPA 493) in the United States and CSA 22.2 number 157M in Canada. When operating conditions are abnormal, the intrinsic safety barriers circuit is designed to divert excessive current to ground. This diversion is accomplished by the Zener diodes, while current limiting is provided by a resistor. If voltage higher than the maximum allowed by the safety barrier is applied across the barrier, the Zener diode would then conduct that excess current to ground. Should current continue to increase, the fuse will open the circuit arresting current flow altogether. 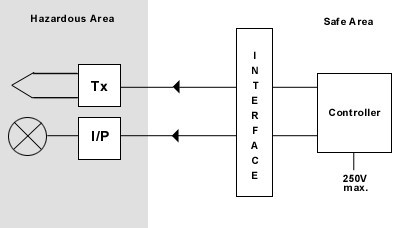 All other methods of protection-e.g., pressurization, use of explosion-proof enclosures, or oil filling-rely on the maintenance of a physical barrier between the explosive atmosphere and the electric circuit. Out on the plant and difficult to monitor, a hazardous area enclosure has only to be breached at one point for protection to become nonexistent. In contrast, intrinsically safe elements provide inherent protection by restricting the energy at its source and as a result offer some advantages that include:

Intrinsically safe pilot valves are ideal for applications where the hazards of combustible atmospheres exist or where low-power circuits are a desired feature. When properly installed with approved intrinsic safety barriers, the risk of explosion due to electric or thermal energy is virtually eliminated. The intrinsic safety design is achieved through an operator design requiring minimal current for operation.

An intrinsically safe operator is designed to keep current draw to a minimum (29 mA) by accurately controlling plunger strokes. Also, since the pilot orifice is located in the sleeve rather than in the valve body, removal of the operator from the valve does not alter stroke tolerances or current draw. This operator design permits the valve to be operated in any position. This is particularly important for a pneumatic actuator pilot valve when the installed orientation of the process valve cannot always be assured.

These switches are in tended for intrinsically safe or low power circuits where a hermetically sealed switch contact is desirable. These switches are housed in an electrical enclosure and provide open and close indication for pneumatic rotary actuators.

Reed switches are magnetically actuated switches that are encapsulated in a sealed capsule to provide a “pure” signal in low power systems. The sealed housing makes them inherently corrosion resistant.

It must be emphasized that a component with an intrinsically safe approval will only be safe either when installed within the terms of the approval documents and of the relevant codes of practice or when the system configuration has been given prior expert approval.